I’ve always loved diners, ever since I was a kid and going to Tucker’s this weekend on a trip to Cincinnati made me think about the role diners and other meeting places play as community anchors.  Then I saw the following article about a Rhode Island program for incarcerated youth that has them learning carpentry and other building skills to restore classic diner cars.  This seems cool, or at least useful, and the response from participants positive, but I always have mixed feelings about programming within the prison system, despite my investment in that. 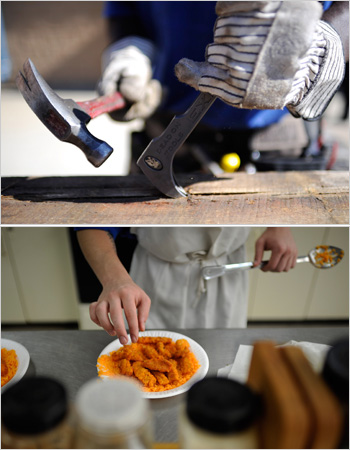 Rob, who said he had â€œbeen in detention a million times,â€ said he preferred the diner work over some other training programs, like the poetry and rapping workshop, which he said censored some language.

â€œYou canâ€™t express what you want â€” nothing about drugs, violence, sex,â€ said Rob, who plans to record a rap album and call it â€œIn Harmâ€™s Way, Volume 1: Talk Is Cheap.â€ â€œThey just want us to rap positive. But I canâ€™t just be talking about sunshine and flowers and how colorful they are. Thatâ€™s not my life experience.â€

Devin, 18, with a 10-year history of armed robbery and lesser crimes, said he also values the diner program, especially taking apart the stove and refrigerator because, â€œI always want to break things.â€

â€œBuilding birdhouses like a traditional high school program is not what these kids need,â€ Mr. Scott said. â€œWeâ€™re actually preparing them for all kinds of skills: thereâ€™s ceramic tile in these diners, sheet metal work, plumbing, electrical. You always meet people who want these kids to be locked away, and I respect their ill-informed opinion. But I look at the training school as kind of like Home Depot of the correctional system. We give them the tools, and when theyâ€™re ready to use it, theyâ€™ll use it.â€

To keep the cash-strapped state from paying $25,000 to $200,000 to restore each diner, Mr. Scott and Mr. Zilka found partners in Rhode Island. New Harvest Coffee Roasters in Pawtucket concocted New Hope coffee (organic, fair trade, shade grown), and about $4 of each $11 bag supports the project.

Students at Bryant University in Smithfield are creating business plans for each diner. Angeloâ€™s, an 84-year-old landmark restaurant in Providence, will operate the diners, employing offenders once they are released.