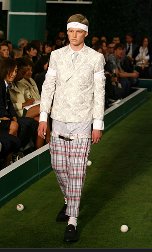 At my high school, we called it sagging.Â  This word described the act of wearing baggy pants that would fall to mid-thigh and, if one’s t-shirt was not also quite oversized enough, reveal one’s boxer shorts.Â  In the midst of attempts by cities like Atlanta and Miami to criminalize sagging baggy pants, I thought it was really interesting to come upon photos from designer Thom Browne’s menswear collection that he showed at fashion week which featured models sagging their pants on the runway.Â  It was a stark reminder that different standards apply to the same activity for different people, in different spaces.