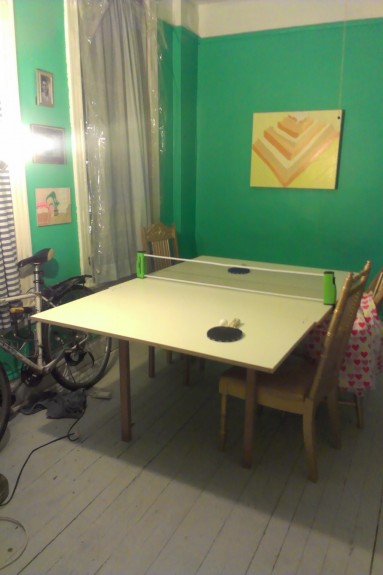 We’re in the midst of the polar vortex so outdoor, physical activity is pretty unpleasant.  My ankle is still messed up from soccer, so I’ve been out of commission from playing soccer, and I’m starting to get stir-crazy.  Inspired by this small apartment video with all its disappearing furniture, I decided to build a table tennis table that could, without too much pain, be disassembled and stowed out of the way.

This design was inspired by this DIY Ping Pong Table Instructable, which is good for a rainy day too.  The major difference is that I only used 3/4 of the 4′ * 8′ board and that the surface rests on the dining room table instead of having to have it’s own legs.

It seems like it would be better to countersink the screws, but I didn’t have the tools to do this.  Surprisingly, the ball doesn’t often land near the screws, so even though they’re not flush, it’s not a problem. 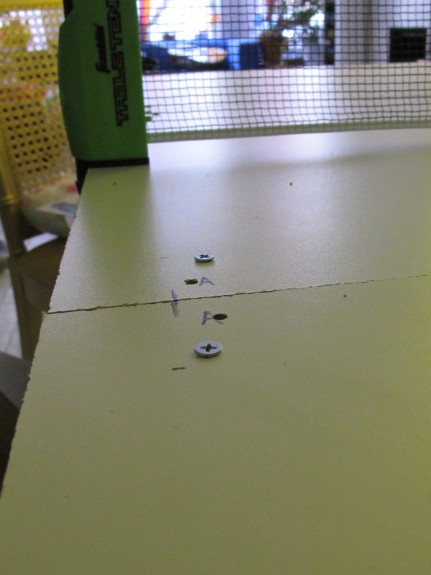 The boards are really heavy, making it somewhat hard to assemble and disassemble.  I avoided lighter materials, because some of my preliminary research suggested that lighter or less-dense boards didn’t allow the ball to bounce. 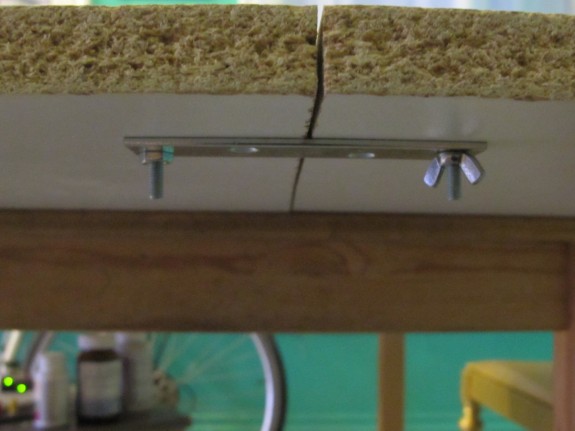 It’s difficult to unscrew the connecting screws, even though they’re wingnuts.  It might be possible to get nuts with larger wings, or to use screws with a square flange, so they won’t spin as the nuts are being removed.

The ends of the table sag a tiny bit, which causes the surface to be uneven and make for some weird bounces.  Using longer mending strips or adding one in the middle of the table might help with this.