I was cleaning up my web host and I found this poster that I designed for the Boxcar Books/Midwest Pages to Prisoners Project Rock N’ Roll prom in March of 2005. 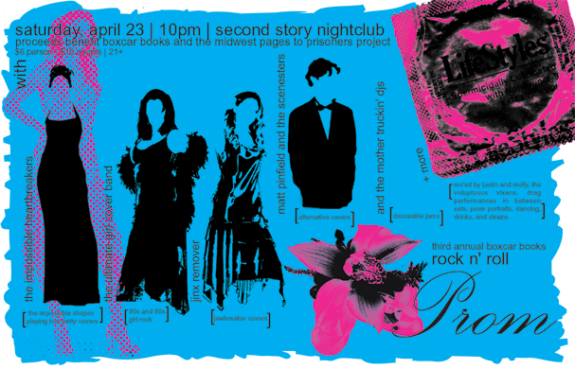 Boxcar Books is turning 6 years old on February 2nd, and we’re
throwing an open-house and dessert party! For six years, Boxcar has
been proud to be one of many centers of community, culture, and
activism in Bloomington, and we owe our success to our you. Our loyal
customers, our supportive Bloomington and IU community, and our
volunteers.

To thank all of these valuable individuals and in lieu of our typical
annual benefit dinner, we?re opening up our doors for an evening of
delicious desserts, door prizes, an art show provided by the Deep
Roots Animal Sanctuary, a sale of 20% off everything, DJ?s and other
surprises. Please come on by for drinks and desserts in a casual
format and celebrate with us the continued success of Bloomington?s
only non-profit, all volunteer run bookstore and community center.

Check out images from our beginning:
http://www.boxcarbooks.org/index.php?set_albumName=The-Shop&name=gallery&include=view_album.php

I wrote a blog post for the blog I write for the local newspaper’s website about the wall at Lincoln and Kirkwood that was extended and capped with plants to make it less hospitable to sit. I compared this to more menacing techniques used in larger sittings and made the point that Bloomington deals with lots of concerns in a way that has the same intentions of exclusion or comes from a place of fear or prejudice, but has a veneer that makes it harder to acknowledge those base feelings. The comments to the blog were, for the most part disappointing, reflecting a fearful mentality …

Kirkwood is two different places – day time – place – then night time place. It is a party place – it has drugs and drunks out in force – there are young people – some bent on doing wrong hanging around in parking lots and alleyways – The homeless tend to gravitate to the area many of the homeless are practicing alcoholics and addicts – Peoples park is a disgrace in the afternoons and eveningsâ€¦ What is it you think that happens on Kirkwood at night that cannot be in conflict with what one could deem as polite or normal society. The barriers are put up to keep the party crowd from destroying, breaking down, trampling on, painting, digging up, trashing and ruining other peoples and private properties, etc. The conflict was started by those who the barriers were put up to protect against. What is it you donâ€™t get about thisâ€¦?

and putting the needs of businesses over those of others who use public space downtown:

I agree with Gus, this has been and is a real problem downtown,and is getting worse.Crack&drugs in the alleys,thef,fires, robberies,graffiti,general costly damage,spare change to the point where it is unaccetable. We have,as a community,been trying to beautify and attract business downtown. Many of private citizens have invested millions for our community betterment.Many of us, our employees and families depend on this growth for our living. It is CRITICAL this is dealt with and not tolerated.

The solution posed by many was to increase policing …

As far as the homeless and mentally ill go, yes they are a presence on Kirkwood, as are teenagers. These members of our community are not always the most pleasant to watch in their behaviour etc., but they ARE members of our community and cannot be locked up just so that our downtown seems more â€œfriendlyâ€ to a certain demographic. That being said, I can understand the desire for a greater police presence in the downtown area, just for the safety and peace of mind of many.
That is a legitimate solution to our problemsâ€¦not creating barriers and making Kirkwood less of an enjoyable place to be.

Reading these comments was frustrating, but not surprising, though the bluntness with which people articulated their points was a little startling. If you replaced an ethnic minority with the word homeless in most of the comments, I think most people would find the commentary absolutely offensive, and it’s interesting to see how people who may view themselves as progressive when it comes to ideas about race think very differently when it comes to class. An acquaintance who has been around Bloomington for much longer than I have pointed out that one of the commenters, Michael Cassady who is a local business owner was a key player in the city’s Safe and Civil City campaign which was, in part, an initiative to confront racism in the community. While I disagree with most of the comments, I did appreciate that the people writing expressed their sincere feelings and weren’t just trolling. One thing that sticks with me from the community mediation training that I took is that people’s perceptions are their reality, which makes things really complicated because, of course, everyone should feel safe and comfortable in the place where they live. It’s just hard when perceptions of safety and comfort are tied to ideas about the differences between people with different levels of economic mobility.

So how do you make people feel more comfortable? To me the answer definitely more policing, because I think a heavy police presence doesn’t really make anyone feel more comfortable, or even make a place look more attractive, even if there is a perception of enhanced safety. And, even if the idea is for police to remove people from public space who make others feel uncomfortable, besides this being ethically unpalatable, is non-solvent because the Monroe County Jail is already horribly overcrowded and people who are incarcerated there, as is the case with many facilities, don’t always get linked up with the services they need. Certainly, being incarcerated, and the stigma attached to it, makes it harder for someone to not be homeless.

There is a wealth of social services in Bloomington, but the question remains: do the available services match up with the needs of the community? And, are people needing help able to access the services they need? The idea of police being a first point of contact for people in need isn’t necessarily a horrible idea, but I’m not sure if most officers are trained to fill a support role rather than an investigative, enforcing, or punitive one. And still, even if the point of police officers when encountering conflicts between groups of people in public space is to link people with services rather than just removing them from spaces, there is still the question of whether services exist.

This sparked a conversation with a friend about the things that Bloomington needs and it not only made me feel better, but made me realize that needs extend beyond just one’s material needs to psychological ones and it also made me think about how one person’s material needs being satisfied might help others in the community feel safer or more comfortable. Or, people just having their needs met might make them happier or more considerate or conscientious in general.

These are some of the ideas that we came up with. I made it into a mind map because I thought that best represented the way that these things related to each other (click image for full-size version):

You can also download the file I used to create the image if you want to add to it.Â  I’d love to see people’s additions.Â  I made the map using the awesome free software program FreeMind.
Actually, I realized that this map, while being related to the discussion on public space, actually came after a Boxcar Books long term planning meeting.Â  I’m starting to accept that it’s okay if people just want to do a good job running a business that runs under a different model than others and offers slightly different materials.Â  However, I’m more interested in trying to get a broader picture of Bloomington’s needs and looking how different institutions can work together to provide the things that we all need.

Our wishlist with the Bloomington volunteer network is out of date.Â  I asked Boxcar folks for suggestions:

The Boxcar online inventory replication program wrapper batch file wasn’t working right because the SSH tunnel to the MySQL server kept dying. So, I modified the wrapper to test to make sure the server was up and then restart the service if it’s not before running the replication. The code looks like this: