I’m reading Studs Terkel’s Working:People Talk About What They Do All Day and How They Feel About What They Do. I’m not exactly sure why I chose this books, but in part, it has to be because I currently have a full-time, 9-5 job, commute and all, for the first time in a very long time and I’m finding it tough to adapt. I’m also trying to reconcile the conflict that I see in the naivety of thinking something like “fuck work”, which I’ve heard a million times in DIY punk lyrics, and really feeling that working full time doesn’t afford me, and likely many others, very much time to do things that are meaningful in life.

I’m only into the introduction of the book, but so far I’ve come across a few snippets that seem relevant to these questions:

“… his work at least gives him a secure place in a portion of reality, in the human community …” – Sigmund Freud, quoted from Civilization and Its Discontents

“Learning is work.Â  Caring for children is work.Â  Community action is work. Once we accept the concept of work as something meaningful-not just as the source of a buck-you don’t have to worry about finding enough jobs. There’s no excuse for mules any more. Society does not need them. There’s no question about our ability to feed and clothe and house everybody.Â  The problem is going to come in finding enough ways for man to keep occupied, so he’s in touch with reality.” – Ralph Helstein 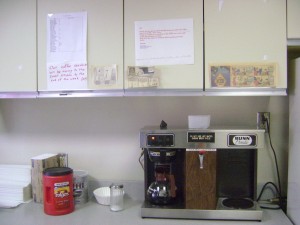 and in with the new …

What’s the word that means the opposite of panacea?Â  There must be such a word, but I don’t know what it is.Â  If ever there was something that was seen as a symbol for everything that was bad about the expansion of corporations and the power of global capital, Starbucks would be it.Â  Hating on Starbucks as the great satan of the coffee world seems so 1998, especially if one thinks about the differences in wages and benefits for Starbucks workers versus many independent coffee shops and the differences in “diversity” between the work forces.Â  At the very least, things are more complicated when it comes to coffee shops or globalization.

Still, it seemed like the punchline to a tasteless joke when I saw the worker-run, communal coffee service at my work banished to the smaller, further kitchen and replaced with the sparkling Starbucks-branded machine.Â  Great. Starbucks wasn’t satisfied with having a presence on every other street corner in some major metroplolitan areas, rapidly gentrifying neighborhoods, and interstate exits, it had to squeeze into my job’s break area too.Â  If I don’t fall back on portraying Starbucks as the totally evil corporate monster, it’s not quite as easy to explain what’s wrong with the coffee giant, but the machine’s arrival bothered me somehow.

I think that what I don’t like about the machine, and the chain in general, is that it erodes a community’s (whether a workplace or a neighborhood) immagination and sense or responsibility.Â  With the collective system, people had to figure out how to negotiate machine ettiquete, what kind of coffee to buy, how much to charge per cup, what to do with any profits, and what to do about delinquent users.Â  Even if someone coordinated the system, I think that there was at least a sense that the existence of the system was dependent on some consideration of these questions and a certain amount of responsibility for maintaining the flow of coffee at the offices.Â  These aren’t hugely important questions, I know, but it’s easy to see how these could be seen as a microcosm of the bigger considerations of a community.Â  With the new machine, you just pay your money and that’s it.Â  If it doesn’t work, someone else will come fix it, or maybe they won’t.Â  If the prices seem too high, you just have to deal with it.Â  Who knows where the profits go.Â  Maybe if the machine doesn’t make enough money, it will go away, but to buy or not to buy and cup size are about the extent of the choices.Â  This doesn’t exactly empower a great deal of positive coffee stewardship.

Thinking about the implications of brick and mortar coffee shops, I recall an independant coffee shop that I once visited, and really liked, in another city.Â  It was in a largely Latino neighborhood that was struggling with gentrification within the city’s long history of racial segregation.Â  On the wall of the coffee shop was a clipping of a news article about the neighborhood entrepreneur who opened the shop.Â  In the article, he said:

“When I came in, there was a lot of old-fashioned-thinking people who thought I would never make it,” says Mr. Delgado, 36. “But I saw an unmet need in the community for a place where people could come and hang out. Just because you’re Latino doesn’t mean you have to eat tacos every day. We needed a cafe.”

If, instead of this coffee shop, a Starbucks had opened up in this neighborhood, it probably wouldn’t have explicitely challenged this assumption, both internally and externally about Latinos.Â  In so many places, I perceive Starbucks as a marker of gentrification, something comforting to outsiders coming into the neighborhood and something unused and hostile to some long-term residents.Â  Instead, a coffee shop might act as a so often absent middle ground where creative-class newcomers, long-term resident coffee drinkers, and those who defy the stereotypes of coffee shop patron that, at least for me, still revolve around the cursed Friends sitcom, all find some sense of investment.Â  A shared space to drink coffee won’t solve the problem of gentricication, but it seems so hard to find other foundations for dialog or accountability.

A sense that a business is accountable and malleable to a community is so important.Â  Otherwise, tough questions about economics and social responsibility get reduced to “should I stay or should I go” as was the case with neighborhood “save our Starbucks” campaigns when the company recently cut the number of franchises or the fate of the “too big to fail” auto industry.Â  That simplification, and the accompanying sense of things that severely impact lots of people being totally out of their hands, might actually qualify as that thing that is the opposite of a panacea, whatever the proper word is.

On a somewhat related note, I’ve been in Italy for almost 3 weeks and have drank a lot of coffee.Â  I have yet to see a Starbucks, or even a to-go cup of coffee.Â  It seems that most people get their coffee from one of the “bars” that seem so ubiquitous.Â  People either sit or stand at a table or a counter, but it’s nice to see drinking coffee as a real break and social activity instead of a fillup.Â  I haven’t been able to perceive much difference between the quality of the places I’ve been too, but I appreciate the little differences that come with independently owned places – the decor, slight differences in the menu, and the idiosyncracies of the proprieters.Â  I really like the cast of regulars that trickle in and the longstanding repoir they seem to have with the folks behind the counter.Â  Maybe this is how it feels for people who frequent their nearest Starbucks, but it’s hard to imagine it being the same.Â  It’s the difference between feeling that twinge of propriety over something in your corner of the world and things being made the same, everywhere.

I was responding to a friend who asked me about balancing my work life and my involvement in community activism.Â  As I wrote my response, I realized that it was something that I wanted to save as a reminder to myself:

Although I only work 20 hours a week or so, having a job that now requires more mental energy and has projects, responsibilities and deadlines makes it seem much bigger than 20 hours worth of space.Â  Also, I have a flexible schedule, which is good because it means that I can make it to most things I want, but also a problem because it means I spend a lot of time and energy scheduling and rescheduling.Â  I think I need to strike a better balance so that I have a more regular schedule and spend less time scheduling, even if it means having to say, “no, I can’t make it to that” more often.

Ultimately, I think that I really need to stop having such a schizophrenic existence and try to find a way to pay the bills by doing technology work to support grassroots community projects instead of trying to pay the bills and do technology work + activism.Â  I also need to find a way to balance my role (which I enjoy) as a technology implementer so I’m also involved in the communication, thinking, and essential work of the groups I work with and not just the IT person.Â  I’m not sure how to do this quite yet.