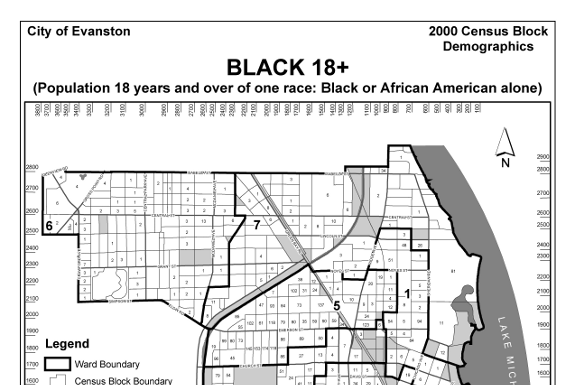 This weekend is the Independent Media Mobile Hackathon in Chicago, an event sponsored by The Media Consortium and Hacks/Hackers.  A few of the Knight Scholars taking the  Community Media Innovation Project at Medill were brainstorming ideas for the hackathon.  We talked about collecting public feedback using mobile devices to do citizen’s agenda style reporting of the upcoming Chicago Mayoral race and using Ushahidi to report and track neighborhood safety concerns.

But the idea I’m most excited about is one that comes from looking at interviews with Evanston residents for the innovation project class.  One theme that comes up consistently when talking to people about Evanston is that the community is diverse, with the public schools being a frequently-cited reflection of the community’s diversity.  However, a number of people interviewed also said the community is economically and racially segregated.

In many ways, this is a racially (or more broadly, demographically) aware Foursquare.  But Andrew Paley pointed out an important distinction: while most social apps help users build and share their own idea of their identity (in Foursquare by aligning themselves with certain businesses that likely reflect their lifestyle), this app would compel users to be introspective about their lives rather than expressive.  It would help users be conscious of the segregation or integration of their lives and challenge how values and belief about race and integration match up with their daily routines.  This app could be one example in a broader problem space of introspective apps.

High on my list of neglected tech. projects is the Testament books to prisoners database web application.Â  This is the database program that projects like the Midwest Pages to Prisoners Project use to track packages sent and returned and books requested in the hopes avoiding delays in delivering books to incarcerated people and to provide metrics that grant providers like.

One of the design challenges has to do with duplicate records.Â  Recipients of books are identified by their state/federal department of correction (DOC) number (if they’re in a state or federal prison – most jails don’t use ID numbers), their state of incarceration and their name.Â  I assume that the database was designed originally to minimize barriers for the book project volunteers so both the name and DOC# are free text fields.Â  Javascript is used to match existing records based on the DOC#, but there is still a large possibility for duplicate records.

The reason for duplicate records is that both the person writing to request books and the volunteer may list their name and/or DOC# inconsistently.Â  For instance, the state may store the DOC# in their database as A-123456 but the incarcerated person may write it as A123456 A-123-456 or just 123456.Â  Volunteers who don’t know about this and aren’t careful may not check beforehand for an existing record.

This is probably preventable through more sophisticated validation, but we still need a way to find duplicates in the existing records.Â  As this application is written in the Django framework, I want to try to use the Django API to find matches.

At first thought, it seems like I will have to iterate through each inmate record and check if there is a duplicate record.Â  This seems pretty slow, but I can’t think of a better way to do this.Â  At this point, there aren’t so many records that this approach will fail, but it would be nice to do something slicker.

The other problem is how to match a duplicate.Â  One approach might be to build a regexp for the DOC# (for instance, match either the first character or omit it, allow dashes or spaces between all characters, …) and then use the iregexp field lookup to try to find matches. One challenge with this is that the current Testament codebase is using Django 0.97 (I think) and iregexp is only available starting in 1.0.Â  Maybe it’s time we updated our code anyway.

There is also the Python difflib module that can compute deltas between strings.Â  However, it seems like this would slow things down even further because you would have to load each inmate object and then use difflib to compare the DOC#s.Â  I assume that the previous approach would be faster because the regexp matching happens at the database level.

As the start of my graduate program grows nearer.Â  I feel like I need to talk and think about what I want to do with journalism more concretely.Â  Last night in conversation, I mentioned that I was interested in exploring how the web and other new media could tell stories outside of the linear narrative structure of a news article or a video documentary.Â  How does the producer’s or audience’s bias get subverted when the audience can pick multiple paths through the narrative? , Unfortunately, I couldn’t think of any examples of this, but Josh referenced Hyperfiction as a way that this is done with creative writing and how it creates a different, intensly immersive experience for the reader.

Working on a mix tape lately, and getting my record player working again, I’ve been thinking about the linear path through which albums or mixes are constructed.Â  Sometimes this can be narrative like a concept album, for example Prince Paul’s Prince of Thieves, or it could be more subtle in a record like Springstein’s Nebraska.Â  While you could certainly play songs on an LP or CD in a different order, digital audio files make this even easier.Â  Unfortunately, it seems like much of the focus on the benefits of digital audio has been with regards to distribution instead of the possibilities for constructing sets of connected songs with multiple paths through them.Â  I often read something years later that makes me re-think a Defiance, Ohio song or the songs in relation to each other.Â  Also, the Allied Media Conference’s recent call for track proposals has made me think about grouping and connecting information.Â  I also think of the recommended EQ diagram in the In Utero liner notes.Â  I think it would be pretty cool to release an “album” of songs digitally, with separate recommended orders of the songs and liner notes that describe the different paths through the songs.

After becoming a more avid Twitter user, I’ve noticed that many people tweet things they’ve bookmarked or links to their blog entries.Â  I love to be able to follow this kind of thing, but to do it personally seems like a lot of work.Â  I like to share bookmarks and my friends are twitter (but not del.icio.us) users, but it seems like del.icio.us is so much better at saving and sharing bookmarks.Â  I want to tweet my blog posts and bookmarks, but don’t want to have to do it specifically.Â  I realized this when I started using Goodreads’ twitter update functionality to tweet automatically when I tag a book as reading or to-read.

I found the Twitterfeed service that converts an RSS feed to tweets and set it to read the RSS feed for my del.icio.us bookmarks.

But, I don’t want to bombard my twitter followers with tweets every time I bookmark something or write a blog entry.Â  Luckily, del.icio.us generates tag specific feeds and I’m sure I could get WordPress to do this without too many problems.Â  So, I’ll just point twitterfeed at a tag-specific feed and tag everything i want to be tweeted with that tag (e.g. tweetit)

Update: The tag specific feed for a wordpress blog is /wp-rss2.php?tag=your_tag or /feed?tag=your_tag

I woke up today and still felt kind of sleep deprived, event after the longest amount of sleep I’ve had in days, so I spent today doing life organizational tasks rather than anything that is actually productive.

Going through notes and old e-mail as well as coming through recent conversations, I started to come upon remnants of ideas that I’d had, or others had that seemed pretty exciting, so I wanted to put them somewhere.

Last week’s Boxcar planning meeting seemed to move too slow for me, which is largely my fault because I was facilitating.Â  It made me realize that its a bad idea to try to facilitate a discussion when one has a lot to try to think about or say about ideas.Â  I felt like I was on a different page, in some ways, and in different ways, from a lot of the people I work with.Â  At one point, I talked about how it was important to think about roles and responsibilities that are beyond what’s happening currently at Boxcar, and nothing could come to mind as a good example.Â  Listening to the radio, I came up with this idea, and while it could be effective from an assy marketing perspective, more importantly, I feel like it will help to generate excitement about books and some of the cultural and political ideas that members of the collective feel are important and offer a more relevent selection of books to the community.

An ordering consultant will assist the ordering coordinator by suggesting books to be ordered for the store, though final decisions about ordering will continue to be made by the ordering coordinator.Â  They will print out “As Featured on This American Life” or “As Featued on Democracy Now!” or other labels to help people notice books that were mentioned in the media.Â  They will find and excerpt reviews of new books (or write ones themeselves) that are ordered to include with the books in the store.Â  They will be responsible for writing a newsletter column, website article, and perhaps a periodic e-mail update/Myspace bulletin to the e-mail list talking about new books.